I first met David and Debbie towards the end of 2016, such a lovely couple to work with as we planned their wedding flowers. Their Wedding day 5th January 2017 inspired David, a police officer with 30 years service, to have a happier job in his retirement. He has kindly agreed to share his story with florry readers.

David’s Wedding Day was also the first official day of his retirement. As a police officer, David had experienced a lot of things. Working as a Detective Inspector, David spent a lot of his time on family Domestic Abuse cases. His final two years were on the Child Abuse Investigation unit.

David was a committed officer, who loved his job. As he reached his retirement, people would ask what he was going to do next. The only answer David could give was that he wanted a happy job!

Before a couple are married by a registrar service Celebrant, they may have a very brief interview with two Registrars. One Registrar will complete the marriage certificate and register. The other will act as a celebrant and conduct the wedding ceremony.  John, who conducted Debbie and David’s Ceremony,  asked David what he was going to do next. Again, in the absence of any clear ideas, he said “a happy job!”. John replied “I used to work for the NSPCC, this is my retirement job”.

David applied for a job as a Registration service celebrant before his honeymoon was over. He now works regularly with John. David told me “this is a happy job!, not without its stresses and strains. But most of the people I now meet are happy, even if they’re crying”. David and his colleagues work hard to make each couple feel special and to ensure that everything goes smoothly. Getting as close to what the couple wants as possible.

The favourite part of David’s new job is meeting the bride and groom before their wedding, sometimes together, sometimes individually.  “It is a chance for the couples to compose themselves and calm down for a few minutes away from their guests and catch their breath before the wedding starts”. “It is also a chance for us to gauge how they want their wedding ceremony to go and how they want us to pitch it, sometimes very traditional, sometimes light hearted, it all depends on the couple”.

David now has his Happy Job! On a couple of occasions, I have bumped into David during a wedding set up. I now always look out for him, and never know where we are going to meet next!

Thank you to David and Debbie for sharing their story. 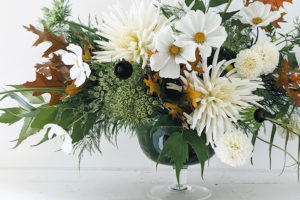 Growing Flowers for my Floristry Lockdown number two has given me the opportunity to get back into my garden this November. It is a chance to tidy up, get ready for the winter, and plant out some bulbs and hardy annuals for the spring! I had a first go at growing my own flowers, for […]